Watch a playlist of people talk about the 1930s here

“After the Great Depression of the 1920’s, there was a short-lived economic boost, lifted by a temporary revival in the automobile sheet business. Yet in the spring of 1933 orders from the electrical motor trades were still below average, by January 1937 however output reached 14,117 tons with orders secured for four months ahead.” Stephen Berry’s 100 years of Orb Works 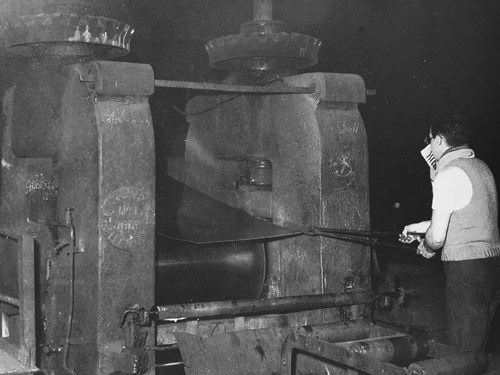 In 1930 a new galvanising work in Buenos Aires, Argentina, was constructed to which black sheets were regularly exported from Newport. Around the same time, the company’s head offices were moved from Bristol to the Orb Works. The Second World War (WW2) started in 1939.

War hit once again in 1939, and with it came many changes to Orb Works, the local community, and in turn the Lysaght Institute. Many men from Orb Works went to fight in the war while others remained to work in the steel works which were given over to support the British war effort. Many women joined the Orb work force, often taking on work previously only done by men. 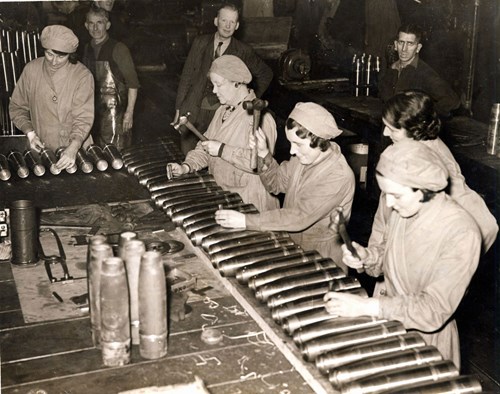 The Orb Works was heavily involved with the war effort, here women can be seen on the munitions line

During the interwar years, the Lysaght Institute continued to be used as the centre of a thriving community. Regular dances were in full ‘swing’ by the 30s with ballroom dancing, Swing and Lindy Hop being the most popular dance styles of the day. 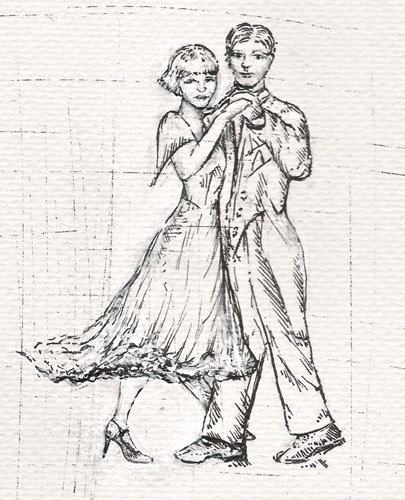 Ladies from Glyn Anwen extraCare Scheme (owned & operated by Linc Cymru) shared treasured memories about dancing at Lysaght. Some of their favourite bands were Duke Ellington, Benny Goodman, and Glenn Miller. Pat Price told us that Glenn Miller was her favourite band leader at the time, and that foxtrot was a popular dance too. Others spoke of preferring a more traditional Tango on the dancefloor.

“I remember dancing there, it was wonderful. If there was a dance I’d be there. My Dad would say don’t you go to Lysaghts, but as soon as he was out of the door I’d be there” Patricia Price

The ladies talked excitedly about memories of live bands playing on the stage, while couples glided or jived across the maple sprung floor, with moments stolen on the balcony to catch their breath and enjoy the night air.

A workers' port of call 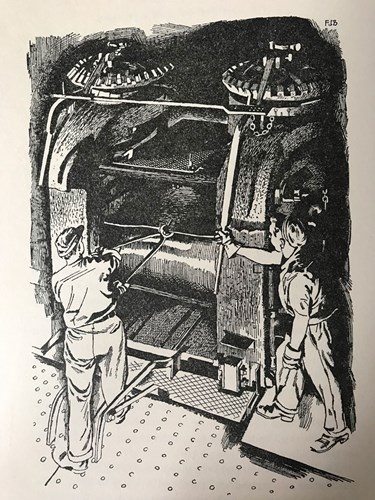 The Lysaght Institute wasn’t just a place for dancing, it was also a place to drink and relax after work. This was a place for the men to come after a long shift, often still blackened and sweaty from the hard day's work. They were always welcome to drink and joke with their ‘brothers’ in the bar.

“The fact that we’d come out from this stinking hole – I mean you’d be filthy. You couldn’t go into a pub, but you could go to Lysaghts in the lunch time no problem at all. And the atmosphere was right because you didn’t feel out of place – the fact that you were in overalls”

“Lysaght had been the second port of call for shift working men who were doing a hot job most of the time – it’s hot in the factory – and they would come and have a pint and a chat and a bit of fun, and tease each other, and generally relax after the day’s work, you know. And those were good memories” June Clark – Linc Tenant 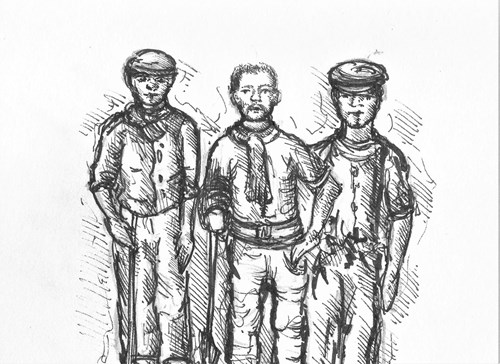 Social Life at the Institute & the Orb Works

Orb Steel works had expanded considerably from a staff of six men and one boy in 1857 to 3500 in the 20s and 30s. There were over 3500 people working at the Orb Steel Works at this time, and their weekly Lysaght club membership of a shilling a week contributed to help shape Lysaght and its grounds. The men themselves organised sporting activities. A bowling green and pavilion were opened in the 30s to the rear, and a bowling club was set up. 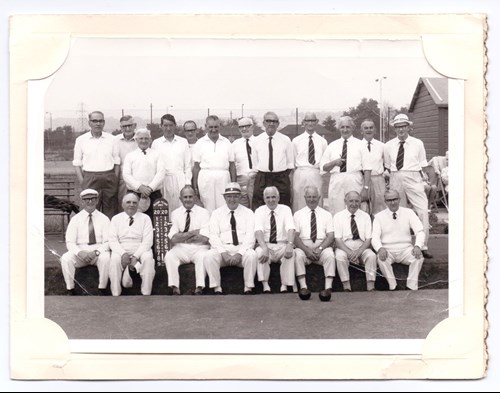 Western Mail - Monday 5 May 1930 by " ONLOOKER." Centuries ago, bowls, the oldest game in the country, was played behind pot-houses of the worst type, and came under the ban of Parliament chiefly because it was looked upon as an excuse for unlawful assemblies and conspiracies. Today it is played in the open in the shadow of workers' palaces, and is encouraged on all bands, principally, that it brings out all that is best in a man and helps to make him a good citizen. Mr. W. R. Lysaght, C.B.E., head of that great firm of sheet iron manufacturers which bears his name amid which keeps over 3,000 men regularly employed, must have been forcibly reminded of these facts as he played the first wood "The Lord Auckland Bowling Green," at the rear of the W. R Lysaght Institute, Lord Camrose, Newport, on Saturday, addressing between fifty and sixty bowlers and a large crowd of other people on the occasion of the opening ceremony. Western Mail - Tuesday 6th of May 1930

An extract from the Western Mail, it reads; "Now that every club affiliated to the Welsh Bowling Association has had its opening ceremony, the playing members and those of the first team in particular, must be looking forward with a great deal of interest to the first match in the Carruthers Shield competition, which will be played on Saturday next. One of the most notable engagements in the first series of games will be that between Victoria Park, who won the championship last year with the youngest set of players that has ever gained that honour, and the premier club, Cardiff, must be proud of the fact that their captain, Mr John Pollock, is now at the head of the governing body. The game will be played on the public green, which, I understand, is in better condition that it was this time last season, and as "The Park" have already played and won two municipal league games thereon, they will enter upon their task full of confidence. Mackintosh, who opened their programme with a private league game against Radyr, will be seen at Howard Gardens, while Penylan will pay their first visit to the Heath Club at Gabalfa. Fairoak, who have lost two of their most prominent members in Mr. Bryn Davies and Mr. O. Hopkins (now wearing the Cardiff colours), will entertain St. Fagan's and Grange will be playing at Whitchurch. SWANSEA'S GOOD START Penhill, who were beaten by five shots, in a "friendly" on the Pontymister welfare ground on Saturday, will enter upon their first Welsh Bowling Association engagement at the headquarters of the Barry Central Club. They are not downhearted over their unexpected defeat, and must realise that it has been the source of great encouragement to the Welfare club, but their captain. Mr. D. Wilson Lloyd, must of been disappointed to find that the total score of 27-14 in favour of Mr. Fred Worsey was exactly reversed on the next rink. Another notable result in Monday's Western Mail & South Wales News was that of the game between Bridgend and Swansea. The West Wales team must of shown great form in winning by 49 shots. Each of the four skips - Messrs. H. Williams, W. Mitchell, R. McKelvie and D. Davies  finished well up, the last named beating Mr. Oscar Jenkins 27-9. Penarth and Newport Athletic also started the season well, despite the fact that each of the two clubs had been deprived of the service of some of their best players through the opening match at Lysaght's Institute. NEW POINT ABOUT BOWLS It was unfortunate that the weather was so unfavourable when this interesting event was entered upon, but the success of the social gathering inside the institute made up for all that was lacking outside. The speeches were excellent and to the point, and, of course, all that could be said about the Welsh Bowling Association was said by Messrs. Wyndham Jones, W. J. Treen, Fred Parfitt, and others. It is difficult to strike a new note when addressing a gathering of bowlers, but one of the speakers, Councillor T. Crowther, secretary of the institute, managed to do so. He emphasised the point that in no other game can so many people find enjoyment on such a small piece of land. Forty-eight men had played five heads on the new green, and when another is constructed nearby, six more rinks will be available and will be occupied every evening during the summer months. 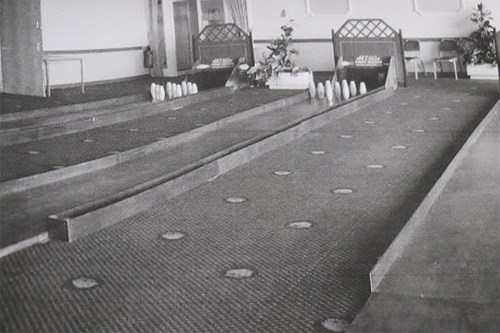 Skittles was a very popular sport for the Lysaght members and matches between teams were often held inside the Lysaght Institute skittle alley. 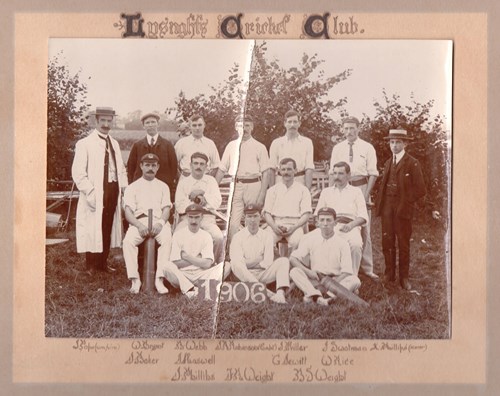 “There was a cricket pitch, I'd cycle down on my bike, and watch the cricket team play, through the fence.” Joan Rowe

Starting in 1930, a yearly vegetable and flower show was held at the Lysaght Institute, which was very popular with people travelling from miles around to take part in the competitions and show off their goods. 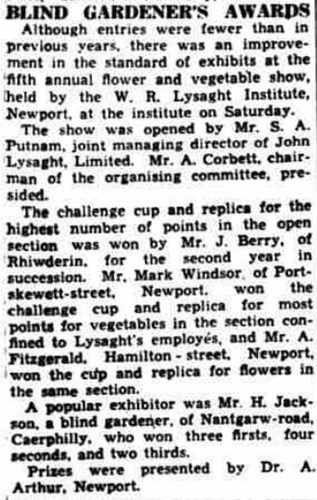 Pop at the Works

Several people remember pop being sold in the works. While researching for his book ‘ORB WORKS 100 YEARS’ Stephen Berry talked to some of the people who made and sold it. There were several families involved in the making of pop, including the Tuffs of Corporation Road, Mrs Arthur, and Mrs Mitchell of Magor Street. The one family that stood out was the Thorpe family. Their story truly demonstrates the close knit community of the Orb Steel works at the time. 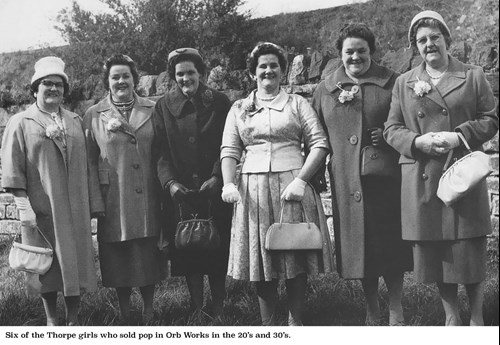 No such thing as Health & Safety

At this time children were often allowed into the works and to the hot mills, to bring big glass bottles of pop, often lemonade or ginger beer, to their fathers and Grandfathers. Listen to Jack Black and Alan Coombs talk about his sister doing just that. There was no Health and Safety back then.

“My father worked in the hot mills in the pre-war period. I remember my sisters would bring him lemonade. It’s horrendous now to think that they were allowed to just come in with a bottle of pop....quite frightening” Alan Coombs