Orb works which was now called ‘Orb Electrical Steel’ after the Government's privatisation and sale of the works in the late '80s. The new company did not remain independent for long and merged with the expanding European Electrical Steels Group, which was Cogent Power, a wholly owned subsidiary of Corus, a move which returned the Orb with the remainder of British Steel PLC which merged with the Dutch steel maker Koninklijke Hoogovens N.V to Corus in 1999. 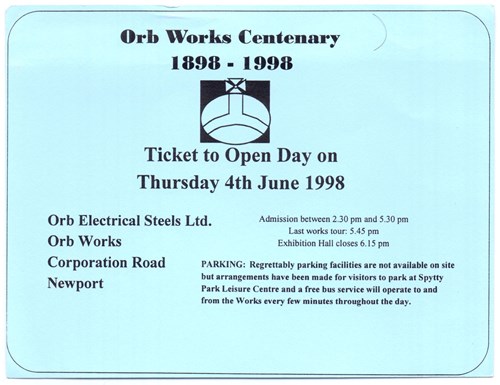 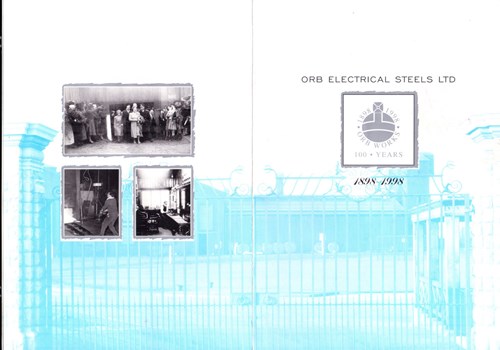 “This important anniversary was celebrated by a number of events. A special centenary exhibition was held in the Orb conference centre which was also open to the public. This was a great success, the plant was also opened for most of the week for employees, their relatives, friends, former employees and the general public were also invited” Alan Coombs

The Orb Steel Works during the 1990s 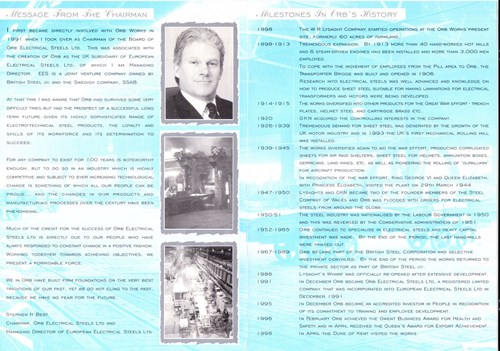 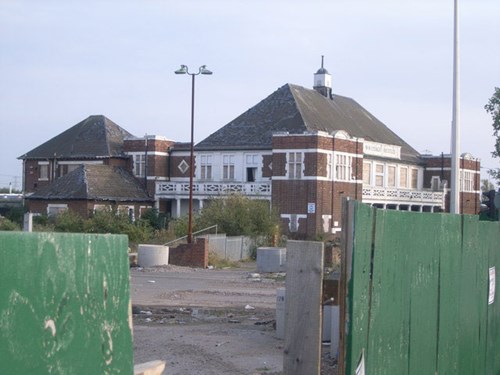 The sad demise of the Lysaght Institute

Steelworks jobs were declining, and people had to find jobs away from the local area, families and community no longer stayed together, as they once did. The car opened more opportunities for workers from different areas, and meant workers no longer needed to live so close to the Orb Works. This in turn influenced the way people socialised, a once close-knit community became more fragmented and distant. It was harder to bring the community together and club memberships dwindled. Social, sports clubs and events sadly started to come to an end. Alan Coombs talked about finding it hard to get the numbers for the quiz nights he ran with his wife, that were once very popular.

The sad demise of the W. R. Lysaght Institute

Lysaght Institute in the 1990s 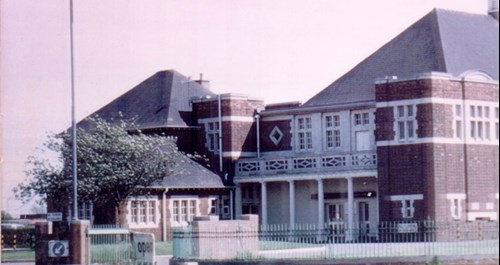 By the 1990s the Lysaght Institute building had started to look a bit run down, it was still used as a social hub, but not in the same capacity as seen in its heyday. Locals used it for event hire, dancing, parties and music nights.  Due to loss of jobs at the Orb works, and people living further away the Club membership was dwindling, and the Club was finding it hard to maintain the upkeep of the building. 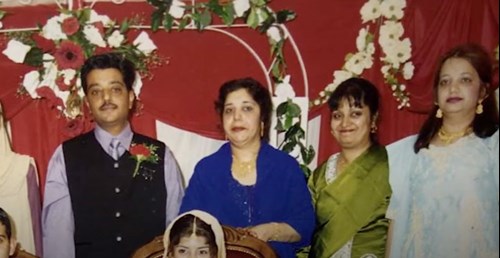 Lysaght Institute was still a grand building, and families often hired it for large wedding parties. Ayesha one of our volunteer's, shared memories of large family weddings held at Lysaght Institute, with hundreds of guests. 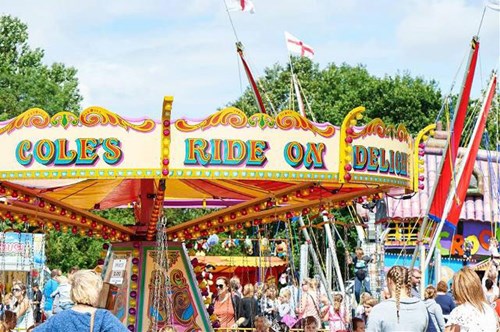 A travelling Fair regularly came to the grounds. Locals remember a Fun Fayre coming to the Lysaght Institute grounds once a year.

Memories of the funfair

“The biggest memory I have is the Fairground they used to put here, in the late '80s early '90s. I remember when I was with my best friend, we were about eight to ten years old, maybe a little older. We were just in high school then, and every year the fair ground was there, that was it we would get ready, with the same outfits, and go to the fair. My husband lived on Corporation Road, and he also shares the same memories as me, coming here with his friends. Back then there wasn’t much to do, so if the fair was there it was an exciting thing you know, get ready, do your hair. I’m sure it was 50p a ride. When I was about 14 or so, things must have progressed in the area, because I can’t remember the fair being there after that.” Shanell Mitchell

Some more memories of the funfair 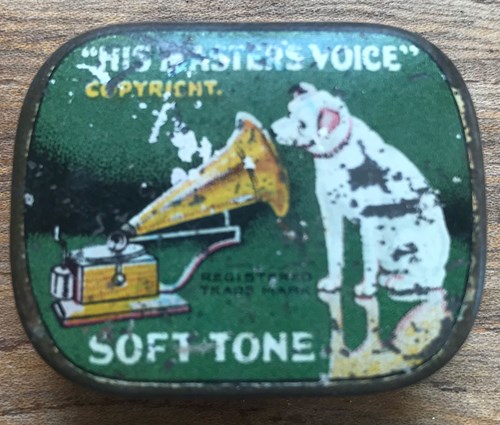 “My nan lived not far from here, and very often when I’d come to visit nan, they’d say ‘oh there’s a fair over the back’, and my nan’s dog used to keep running off, and they used to want to buy him because he was such a performer, he would be there begging, he’s just like that little dog from My Master's Voice if you put a frill round he’s neck he’d be just like that.”

Memories of parties and events 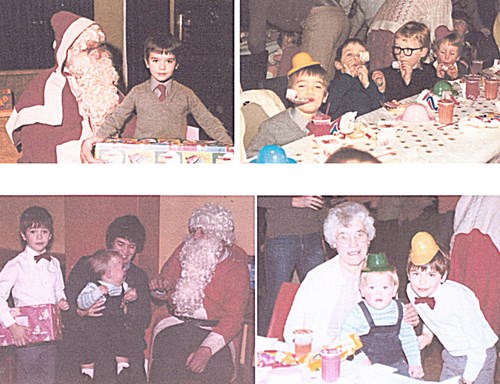 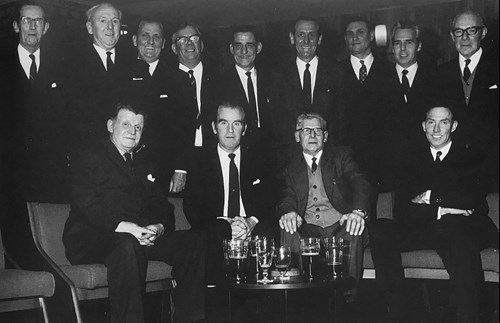 Lots of people remember coming to Lysaght's to celebrate family events, from weddings to birthday parties in the '90s. Shannel Mitchell talked to us about some of the parties she attended as a child.

“I grew up in Newport so I remember always walking past Lysaght. I remember Lysaght's as being invited to older relatives parties like engagement parties, and I was invited to some 10th birthday parties. I can remember coming in as a young teenager to a party, and to me back then it looked huge, it was bigger than it is now. It looked dark and big, with a dark wooden floor. I remember loads of children running around on the dance floor. I remember it was a really good party if you had a party in the Lysaghts. People brought their own buffet food.” Shannel Mitchell 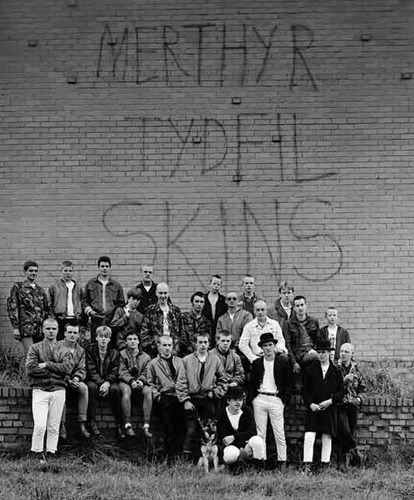 Fishing club or something a bit more sinister...?

Outside organisations often booked the large ball room for conferences. Richard Kendall talks about a fishing club who booked Lysaght Venue for their annual meeting, yet on the arrival of the participants, it turned out to be a Right Wing BMP social gathering.

“We’re talking 20 years ago, so mid '90s, the Lysaght Institute was not the fine building that we know today. It was being used by different groups, the story that was told to me, by one of my friends, was at the time, there was a social gathering which was organised by a fishing club, my friend's now wife was asked to turn up and work behind the bar, when she got there she noticed a lot of gentlemen with short hair and bomber jackets, it turned out it was a meeting of a Right Wing BNP group who were having a bit of a social, so it was quite an interesting evening from what I can gather, no fishing rods there or anything, but quite an interesting gathering.”

A performance for two 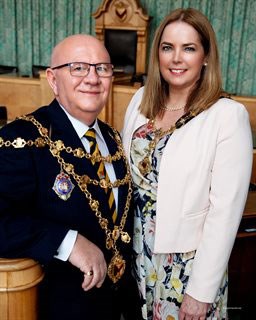 The Right Worshipful the Mayor of Newport Councillor William J. Routley is Newport's 387th Mayor. He talked to us about performing at Lysaght Institute, and practising in the ball room while his two daughters played at the back of the Hall.

Memories from the Mayor